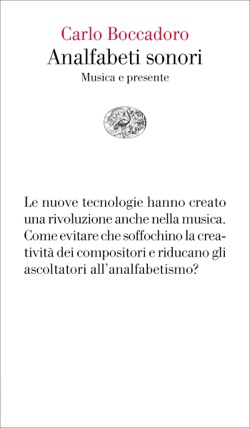 Reflections on Music and the Present

Internet has produced a revolution in the world of musical composition, all over the world. The ability to experience on one’s own computer, in real time, musical languages deriving from any geographical latitude and any past or present age, has completely remixed the very concept of composing, opening up to musicians of the young generations possibilities of stylistic mixtures and sonic hybridizations that were quite unthinkable only twenty years ago.

Of course, this infinite possibility of intermixture imposes a far greater responsibility on the writer than in the past. To be able to make distinctions in the vast ocean of signals that come from all directions, to be able to extract an effective synthesis from hundreds of different stimuli, often antithetical to one another – that is the real challenge that our time presents to anyone who wants to create music. Meanwhile, people’s ability to focus and concentrate on a piece of music seems to be progressively decreasing as technology deliveries new products at a faster speed and pushes the audience to multitask. Since a few years, the idea of listening to music from a vinyl or even a CD has completed disappeared. It has been replaced by audio streaming through digital platforms such as Spotify, which provide listeners with an immense jukebox, where almost the entirety of musical production is simultaneously available.

In the space of three minutes one can go from listening to the mediaeval laudae of Laudario di Cortona to the last song of a Speed Metal band, from Beethoven to Paul McCartney, from Mozart to Bulgarian Polyphonies, in a continuous crossover that annihilates the very concept of an history of music. In this everlasting present, the disparities and inequalities between different types of music risk to disappear in a blurred and tasteless mix. Music listening becomes then like a ball in a pinball machine bouncing from one musical genre to the next, which badly reconciles with the fruition of musical artworks that require long listening times – such as Operas or symphonies.

In this context, how can listeners avoid becoming acoustic illiterates?

The book aims to answer this question from the perspective on an engaged composer, presenting an original overview of ways in which technology impacts music fruition today.